Sign up to get exclusive deals, giveaways, and updates on our Products.

Powered by the NVIDIA Ampere architecture, the GeForce RTX 3080 Ti delivers an incredible leap in performance and fidelity with acclaimed features such as ray tracing, NVIDIA DLSS performance-boosting AI, NVIDIA Reflex latency-reduction, NVIDIA Broadcast streaming features and additional memory that allows it to speed through the most popular creator applications as well. Featuring the unique HoloBlack design that has won the prestigious 2021 Red Dot Award, AMP Holo models deliver factory overclocked performance out of the box, and feature an aurora-like holographic finish allowing the lighting paths underneath to shine through. The Dynamic RGB lighting can be customized with the FireStorm utility enabling the changing of colors and lighting modes.

Trinity adheres to a minimalist design that balances aesthetic with functionality. The reinforced metal backplate emphasizes the RGB lighting infused into the carved paths adding additional detail and airflow.

The ZOTAC GAMING GeForce RTX 3080 Ti Series take the cooling performance to the next level by taking advantage of a 3-slot thick aluminum heatsink sectioned in up to 3 groups to fully enfold the copper heatpipes for optimal thermal conductivity. A new and improved heat pipe layout is utilized in a more densely packed space, adding up to 72% more direct contact over the GPU than previous generation models to transfer heat more quickly away from the core. 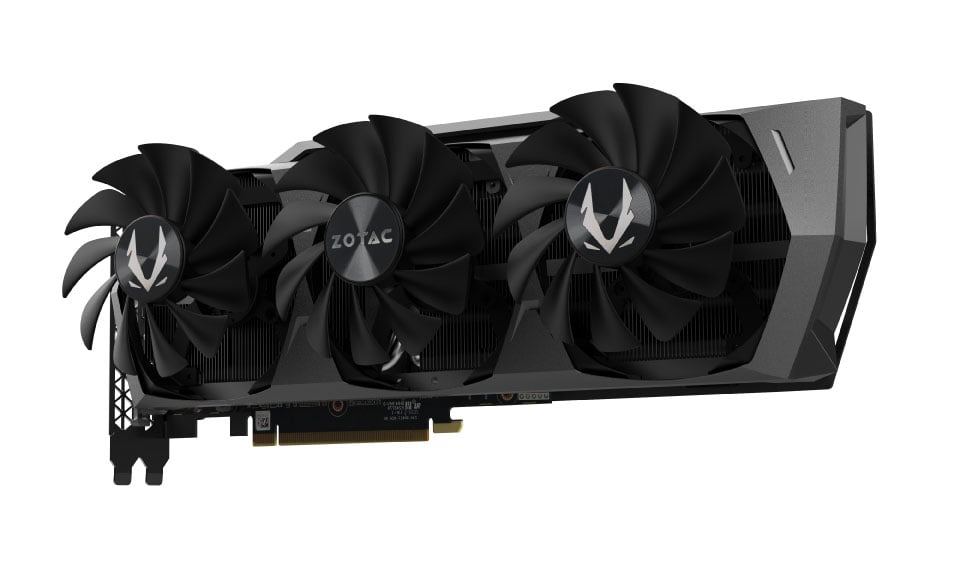 Additional enhancements to performance and lifespan include the FREEZE Fan Stop and Active Fan Control features that allow the ZOTAC GAMING graphics cards to be more efficient and quieter. FREEZE stops the fans when the GPU is idle, while the Active Fan Control allows users to adjust fan rotations independently.

Users can fine-tune and monitor the GPU in real-time with FireStorm, customize or synchronize the effects of individual lighting zones, adjust the fan speed, and more. The AMP Extreme Holo features a Dual BIOS controlled via a soft-switch FireStorm. Users can switch between QUIET mode for lower noise and slightly higher temperatures or AMPLIFY for lower temperatures and faster fan speeds.